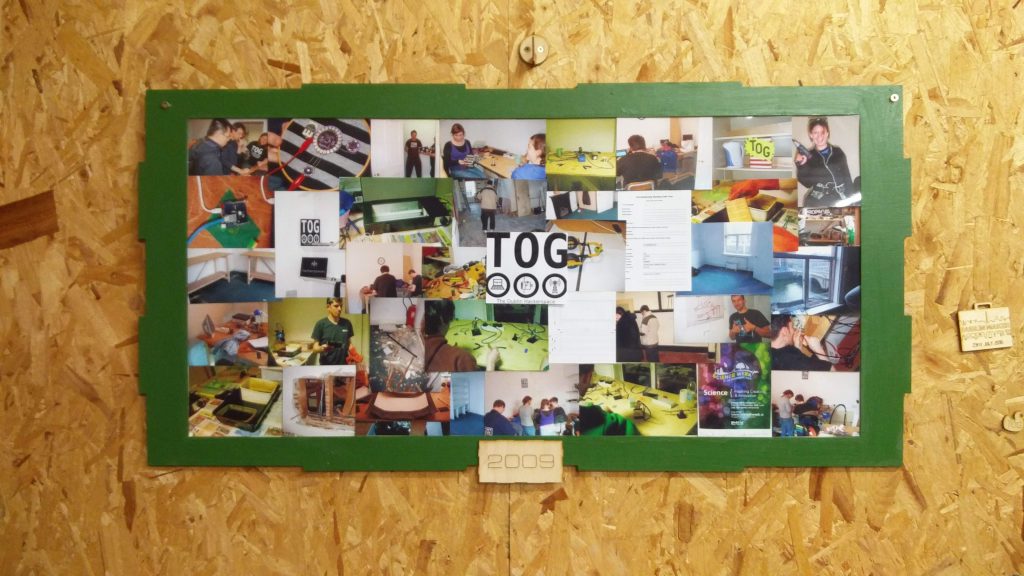 Sometimes we get a bit nostalgic for the early days in Tog.  We had our first tiny place in Arran Quay, a small three room office unit. We started running our first workshops and open days for the public there. We have changed a lot in the last nine plus years. To showcase the early space and show oof photos of when we were all much younger, we have created a photo collage of what we got upto in 2009. It was started way back during Science Hackday Dublin but only finished during our recent finishaton.  You can now see it hanging on the wall in our space or view the individual photos on our gallery.

A new makerspace is on the scene in Dublin, Lovelace Space. The space is named after Ada Lovelace, the mathematician, writer and world’s first computer programmer. The space is still in the planing stage but that is not stopping them from hosting their first event this weekend in the Black Sheep pub.  You can read about their cross stitch workshop on their website.

This new space joins a vibrant community of spaces and fablabs across this island. You can read about some of them in the links below.

Some of us have travel across the seas to visit the 33rd annual Chaos Communication Congress (33C3). It’s a four days of total hacker fun. Filled with talks, workshops and many a good time.

If you are at Congress be sure to drop by the Irish Embassy and Tog Assembly. If you can’t make it along in person you can watch it all live streamed over the internet. -> https://streaming.media.ccc.de/33c3

Check out the sign Tdr made for the occasion. 3 sheets of 3mm plywood glued together. For photos of the build check out our gallery. 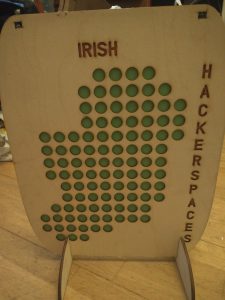 Well the world has turned and another year has almost passed. What a year it has been for TOG. We started 2016 with our doors closed to the public. We had just made our big move from Chancery Lane. Blackpitts was a blank canvas for us. It was a completely open-plan space and we had to decide what to do with it. It wasn’t long before we had a proposed layout and we started building rooms. We built ourselves a fantastic common room, a classroom, a make-room to house our laser cutter and electronic stuff, and a general workshop. We decided that our traditional January birthday party and Open Social would be our grand re-opening to the public . We billed it as a monster bash, and it didn’t disappoint. It was our biggest social event ever. We invited just about everyone that we could think of, and most of them came.

Everything at TOG happens because our members and visitors are so generous with their time and effort. Everyone volunteers for free. If you’re looking for a 2017 New Years resolution, why not drop in and see us. If you’ve never been in before, we’ll give you the grand tour of the space. Talk to members and visitors about projects or things you’d like to do. Ask about our plans for 2017. If you like what you see, ask about joining as a full member. What a great New Years resolution that would be! 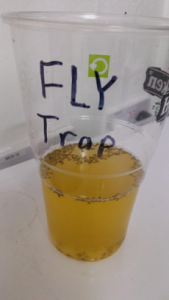 This time of year, everyones kitchen seems to be buzzing with tiny fruit flies. If you were taking part in a hackathon to build a fly trap, this one would probably win….. and there’s not an Arduino or a line of code in sight. But what is the mystery mixture in the glass? We hear rumours of beer and vinegar. Drop in to our kitchen to have look.

A bunch of us headed to an event last weekend called Electromagnetic Field in the UK. EMF is a 3 day camping festival held every two years with over a thousand people attending. The weekend is filled with talks, workshops and lots of crazy art installations.  We teamed up with other hackers from Ireland to form our own little village to have a place to call home for the weekend.  Our members kept themselves busy over the weekend by adding to the lineup with their own talks and workshops check out below.

EMF had a full program of events to keep all the kids entertained. We ran our bridge building competition with the young hackers of EMF. Congratulations to the hope bridge on their win.

Check out the rest of the things we got up to in our photo gallery or what we did with the cool EMF badge.