This project has come about because of the need to use cordless power tools in a cleanroom. Large numbers of screws and fasteners need to be removed and reinstalled on equipment during preventative maintenance. The proposal is to use power tools to speed up the process and reduce operator fatigue. You might think that a brand new or well maintained power tool would not give off any airborne particles, but that’s not the case. Airborne particulates are a big problem in a cleanroom. They can damage equipment and ruin product.

There’s a huge range of cordless power tools available from all the big-name manufacturers that you know well. Testing some of these tools with a particle meter highlights the problem. Background airborne particle readings are zero, down to 0.1 micron.

When the tools are brought near the meter however, the results are off the scale. This is hardly surprising, given that these tools are not specifically designed to be cleanroom compatible. This particular tool was a reversible ratchet with a brushless motor, so the particles were not carbon dust from the motor brushes. They were more likely from bearings, grease, and the reversible ratchet head.

Having discussed with TOG members, the proposal is to build some kind of enclosure around a tool…. a second skin….. with a connection to a vacuum line. That way, any particulates generated by the tool get drawn away. The tool must still be usable obviously, so the enclosure cannot be so clunky as to make it hard to use. An enclosure or covering that is conformal & flexible rather than rigid might be best. It must not collapse under the suction force. Silicone rubber has been suggested and there are some suggestions around vacuum forming, heat shrinking, 3D printing and silicone molding. If you have any comments or suggestions, feel free to drop us a line.

An ancient proverb says that power tool failures occur in threes. During the same week that the lathe motor burned out and the compressor wire meltdown has turned it into a scary noise machine, we also had a mysterious malfunction in one of our welders. It didn’t release any smoke, didn’t make weird noises. It just didn’t weld. 0 volts across the output.

This machine, a small 180A TIG/MMA inverter welder, has recently been repaired. It was not used heavily, as TOG has only so much use for welding. In fact, it was only used by a couple members to practise their welding skills.

On one hand, this machine was 5 year old, has been used extensively in the past and could have been written off as death of old age. The cost of a commercial repair would probably exceed the value of the welder. On the other hand – why not try to repair it ourselves before scrapping it?

END_OF_DOCUMENT_TOKEN_TO_BE_REPLACED 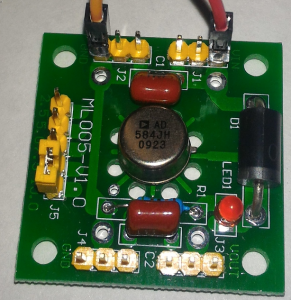 If you work in industry or business, you probably have your electronic test gear and multimeters calibrated regularly. If you’re an amateur you probably don’t. We don’t have a fancy calibrator at TOG which can cost 1000’s and need regular calibration in itself. We do however have a 2 Euro voltage reference based on an Analog Devices AD548 voltage reference. Checking some of the multimeters that we have around, and the results are surprising.

The reference outputs 2.5, 5. 7.5 and 10V. Now this is a bit of a crude test, because this little reference is not calibrated or traceable to any standard. If you assume however that the voltages it gives are “exact”, a 20 year old Fluke multimeter is reading almost perfectly . Some other multimeters that we checked are a bit off, but still not too bad. We’re going to check some of the ultra cheap meters that we have too.

We have been improving our workshop a lot lately. Check out some of the work below. 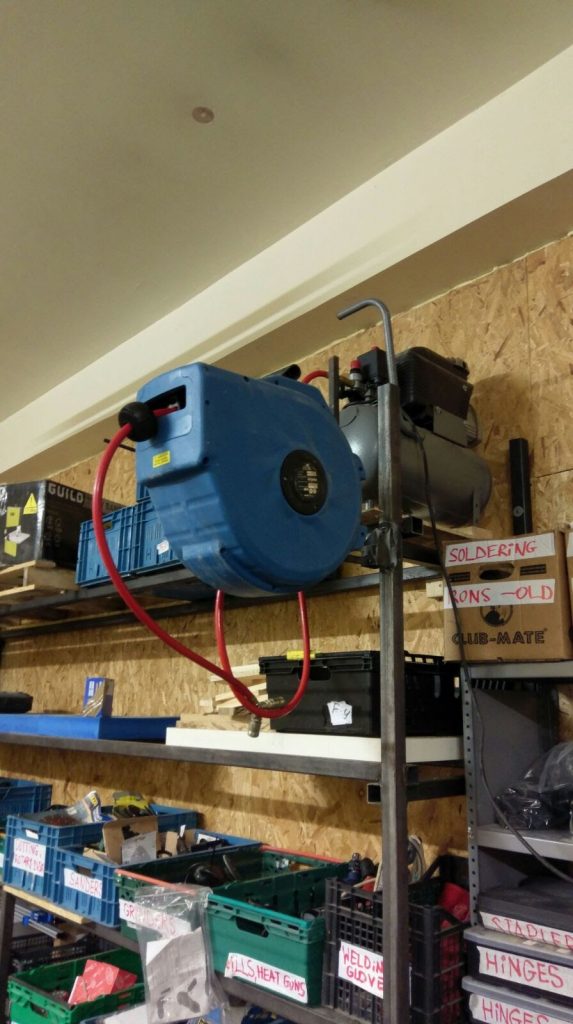 We have found a new home for our air compressor and mounted it on our metal shelves.   We also mounted a air hose reel. It makes using air tools in our workshop very easy. 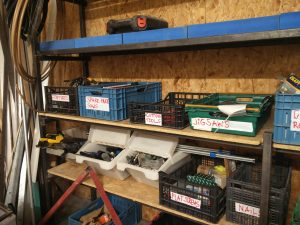 Label all the things. If you have a lot of stuff, soon you find yourself in a situation where you can’t find anythings. We have done a big sorting job of our stuff. So now most things have their own box. 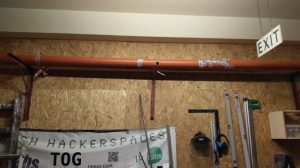 We have long things like pipes  hat need to be put somewhere but they don’t fit in our current wood storage area. Long things now have their own area . aka Long things storage.

Drop by our upcoming Birthday Party to see a host of changes we have made to the space since our opening last year. 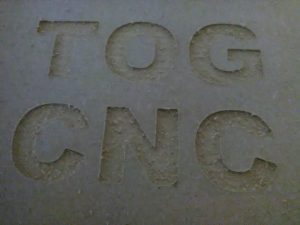 A few months ago we’ve mentioned a DIY build of a CNC router. The project turned out to be more complicated than we anticipated. The steel-based construction is not very forgiving, and the large size of the machine doesn’t help. Still, due to all the help from many members we managed to overcome a number of difficulties and do a few test engravings in MDF.

MDF is not a difficult material to mill – the most noticeable problems are the awful dust and the fluff around the edges of the cut.  The furry edge is easily fixed using sand paper, but the dust will probably require some more drastic measures in order to protect our lungs. Eventually we’re planning to cut and engrave a variety of materials, many of which have interesting properties but are incompatible with our laser cutter.

Visit us during one of our Monday CAD nights to see the new machine in action or in the video below.

END_OF_DOCUMENT_TOKEN_TO_BE_REPLACED

Our lathe is finally getting some good use! This time, a small part

was made from aluminium, a coupling for connecting two pieces of tubing for the water cooling system in the upcoming CNC router project. It will replace the existing temporary hose-and-clamps hack.

A piece of bar stock was clamped in a 4 jaw chuck, made into a cylinder and turned down to about 16mm diameter. Next we turned half of it down to about 6mm and drilled a 4.5mm hole through it, using a drill chuck. Lastly we smoothed the edges slightly and parted the whole thing off.

The end result is more f 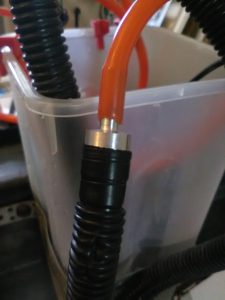 unctional and looks a lot better!

The whole operation went smoothly in overall retrospection. However, we had few small issues to deal with on the way. Firstly, it wasn’t obvious how to set gearing for the power feed, as the manual wasn’t very clear. Another problem was that the  square shape of stock, required the use of a 4 jaw chuck, which is not self-centring.  That adds a couple of extra steps to set up, as centring of the stock has to be done manually in such a case.