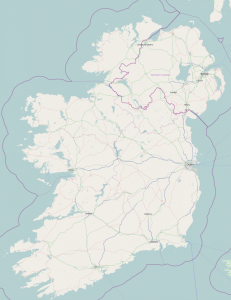 On March 24th from 10am to 3.00pm Open Street Map Ireland will be have its first AGM to set up a formal organisation to cement what has been a loose collective of like minded individuals into a legal structure.

OSM is a worldwide mapping initiative, which is fully open source, i.e. made by people for other people, that anybody can contribute to with a low barrier to entry. There are a variety of tools to get you started, where you can shape the map you use with the detail you require, instead of hoping a proprietary solution will fit your need. There has been OSM activity in Ireland for well over a decade, with townland boundaries, coastline, cemeteries and monuments being mapped in earnest. Often newly opened roads get mapped as soon as the tarmac dries, historical building, paths, and other information not always included in official spatial data. Some areas areas need more detail, so there is still plenty to do.

Irish mappers have also greatly assisted the Kingdom of Lesotho to map and train their citizens in mapping their country, which not only saves them high costs, but empowers the people to be help themselves and use the open information to improve their lives. Anybody with an interest in maps is welcome. Find out more on Facebook, Twitter or the OSM Ireland mailing list.