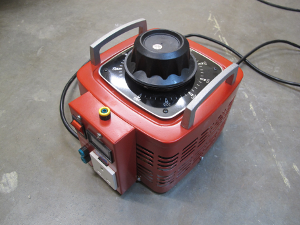 Actually there was nothing wrong with it. It didn’t really need “fixing”. A variac is a kind of variable AC transformer. They are very useful for testing AC loads because they can give a variable output voltage usually from 0 up to some value. This particular one can output from 0 to 250V and supply about 12A of current.

It is rated at 3kVA which is quite a bit. A big horse of a transformer like this has a big inrush current when it is plugged in. The surge is so great, that it was tripping the circuit breaker on our distribution board. The breakers on TOG’s board have C-curve trip characteristic, so they’re really not suited to this kind of load.

So something had to be done to limit the inrush current. We thought about a power resistor and a shorting relay, but in the end opted to try an NTC type surge limiter. This is a type of resistor where the resistance falls with temperature. At room temperature the resistance measured was about 12 ohms. The resistance falls rapidly as the temperature rises. Even so, the thing gets hot at heavy load. We used the 2kw heatgun as a heavy test load. We mounted the limiter high up inside the enclosure, in free air. Plenty of insulation and some cable ties to secure it. Tested it and no tripping now. A bit more testing is required however. particularly at higher currents. Need to do some I²R calculations and temperature measurements. Pics here.